With the release of the new Intel Core i7 9700k vs Ryzen 7 3700x battle, a few weeks ago, the high end CPUs are again the centre of attention with good reason. The new generation of CPUs are powerful and efficient. But what is more important to most customers is not the raw power of a CPU, but more about what the customer is going to get for his money.

AMD’s comeback in the CPU market is well underway, thanks to the surprisingly capable performance of its latest CPUs. However, the company’s comeback has prompted Intel to speed up its own CPU development plans. The new Intel i7 9700k promises to be a powerful CPU that can go head to head with AMD’s latest CPUs.

However, how does it stack up against AMD’s top-tier chips? Let’s find out.

“For the enthusiasts among us who have some breathing room in their budgets, Core i7-9700K is a much smarter choice for gaming than the pricey Core i9-9900K. It serves up similar performance at a significantly lower price. It’s no slouch in heavier…”by Tom’s Hardware

The Ryzen 7 3700X is one of AMD’s 3rd generation Ryzen chips built on a 7nm manufacturing node, boasting eight cores and 16 threads. The Octa-Core processor handles 3.6GHz on the base clock and a staggering 4.4GHz on the boost clock. The Ryzen 3700X’s 7nm chip bags more than 19.2bn transistors make sure to offer an excellent gaming performance.

The Ryzen 7 3700X also packs more L2 and L3 cache, 4MB and 32MB, making a total of 36MB of Cache that boosts the gaming performance of the processor, especially in older 1080p esports games.  It also features the DDR4-3200 memory type with 128GB memory size and ECC support.

The Core i7 9700k is Intel’s 9th generation of Coffee Lake Core i7s that features 8 Cores and eight threads on a 14nm process node. The i7 9700k surprisingly does not feature hyper-threading, but despite the surprise, this excellent Coffee Lake i7 also surprises you with its superb single-core performance. This Octa-Core processor boasts up to 3.6GHz on base clock and a staggering 4.9GHz on turbo boost.

The i7-9700k features thermal design power of 95 watts, with a maximum temperature of up to 100C. One thing that I like about this processor is that it comes with an integrated graphics card, i.e. Intel UHD Graphics 630, which makes sure to offer excellent gaming performance.

Intel may have dropped the hyper-threading, but its turbo boost clock and single-core performance make it one of the best processor out there. Unlike the AMD processors, the Intel Core i7 9700k does not come with a stock cooler, so you would need to buy a cooler if you’re planning on overclocking your processor. The i7 9700k features the DDR4-2666 memory type with 128GB memory size and no ECC Support.

The main difference between Ryzen 7 3700x and Intel i7 9700k is the processor speed. i7-9700k does not feature hyper-threading than 3700X, which is quite surprising, but then, its single-core performance leaves the 3700X quite behind. Both the processors feature 8-cores but the 3700X features 16 threads as compared to Intel’s eight threads.

The AMD Ryzen 7 3700X features a higher RAM speed, i.e. 3200MHz, compared to Intel’s 2666MHZ. The Ryzen 7 is better in almost everything, but the only thing that stands out for the i7 is gaming. The i7 chip overtakes the Ryzen 7 in gaming because of its integrated GPU and excellent single-core performance, even though it lacks hyperthreading. The i7 edges the Ryzen 7 in gaming performance and holds a difference of about 5%-10% on 1080p and 1440p.

If you’re a gaming enthusiast and an overclocker, Intel’s i7-9700k is the perfect way to go, but if you’re going after overall value, then go for the Ryzen 7 3700X. The Ryzen chip is ideal for streaming, video editing and other stuff, while the i7-9700k is best for gaming, photo editing, Office applications, and other heavy stuff.

To sound even more straightforward, the 3700X is a well-balanced processor that promises to handle every kind of workload quite well, but if you’re into gaming and want the best gaming processor for your system, then the i7 chip is the best choice for you. 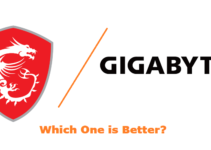