“So most anticipated piece of PC hardware in recent memory is finally here. This in itself is a new chapter for AMD and one that anyone should appreciate. Remember strong competition is typically always good for the consumer, we can see that with the…”by ThinkComputers

The Ryzen 5 2600 is one of the most excellent mid-range processors released by AMD in the past few years. Based on the company’s improved Zen+ architecture, the Ryzen 2600 ensures an admirable performance, both in gaming and multitasking.

AMD’s Ryzen 5 2600 is a six-core desktop processor that uses the AM4 platform. It has 12 cores and supports multi-threading. This means that each core can handle two threads at once, resulting in a total of 12 threads on the 2600. The processor is capable of handling heavy workloads without difficulty due to its multi-thread support.

The Ryzen 5 2600 clocks up to 3.4GHz on the Base frequency and 3.9GHz on Turbo Boost frequency with 34x unlocked multipliers. It also features a DDR4-2933 RAM type, which can be seen in several mid-range Ryzen processors. The DDR4-2933 RAM supports up to 64GB size with maximum bandwidths up to 43.71GB/s and ECC support.

Moreover, the Ryzen 2600 also packs a 3MB of L2 cache size, and a shared 16MB of L3 Cache size allows the processor to provide an excellent gaming performance. It also features an outstanding 65W TDP with maximum working temperatures to 95C, which is bundled with the Wraith Stealth stock cooler that makes sure to keep the temperatures down, be more power-efficient, and offer excellent performance.

The Ryzen 7 1700 is one of the most brilliant and productive processors out there in the market, costing you just over $300, which offers a higher-core count than Intel’s competing i7 chips. This Ryzen processor can easily compete with Intel’s Core-i7 processors, offering an overall better performance and a pretty decent price tag.

The Ryzen 7 1700 is based on AMD’s Zen architecture built on a 14nm manufacturing process, featuring 8 multi-threaded cores. These multi-threaded cores can execute two threads at once, making a total of 16 threads on the 1700. This Octa-core processor can clock up to 3.0GHz on the Base frequency and 3.7 on Turbo Boost frequency.

With 30x unlocked multipliers, the Ryzen 1700 can overclock and offer higher frequencies. Although it is bundled with the Wraith Spire cooler with LED lighting, the 1700 won’t let you overclock too much; you’ll need a much better aftermarket cooler to achieve higher frequencies.

This processor features a DDR4-2666 RAM with 64GB size and memory bandwidths up to 39.74GB/s. The PCI 3.0 Express version with 20 Express Lanes also reduces loading times and provides an excellent gaming performance. It also packs a 4MB of L2 cache size and a shared 16MB of L3 cache size.

AMD has always made sure to pack significantly larger Cache sizes than Intel’s competing chips, making sure to offer superior performance. It also features an outstanding TDP of 65W with a maximum working temperature of up to 95C, making sure to consume less power and be more power-efficient.

The main difference between Ryzen 7 1700 and Ryzen 5 2600 is not that must. Both the processors have almost the same gaming and multitasking performance; the only differences that can be noted are the main features of these two.

If we look at the Ryzen 7 1700, it features 2 extra physical cores and 4 extra CPU threads, with larger Cache sizes. The higher-core count and multi-threading support allow the Ryzen 7 1700 to run almost every game with ease and handle serious productivity tasks without any problem.

On the other hand, the Ryzen 5 2600 features fewer cores, but it still clocks higher frequencies than the 1700. The improved Zen+ architecture allows the 2600 to achieve higher clock speeds, and the modern technology helps it offer superior single-threaded performance.

Most of the latest games require at least 6 cores to run smoothly, which makes the Ryzen 5 2600 an ideal processor for gaming and light productivity work, that too at a very reasonable price. But, the 1700’s two extra cores come in handy for those who are planning on running extremely serious workloads on their CPUs. The Ryzen 7 1700 is an ideal processor for content-creators, streamers, and other multitaskers.

The answer is quite simple to wind it up; choosing the perfect processor between these two entirely depends on you. If you’re looking for a processor that offers an excellent gaming performance with decent productivity performance, then you should buy the Ryzen 5 2600.

The 6 multi-threaded cores and higher frequencies will make sure to offer an exceptional gaming experience. It is also about $130 cheaper than the 1700; you can use the saved bucks on some aftermarket stuff to further boost your processor’s performance.

But, if you’re a serious multitasker and you’re planning on running some of the most intensive applications on your processor. The Ryzen 7 1700’s extra two multi-threaded cores will make sure to handle even the cruelest workload without any setbacks.  The Ryzen 7 1700 might cost you an extra $130, but it will also make sure to provide an exceptional gaming performance and handle your productivity workloads. 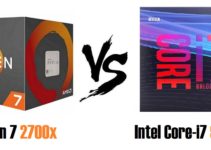