What Is VulkanRT – Is it a Virus and how to deal with it?

If you are reading this article, it is because you probably just came across something unusual on your computer. Yes, the VulkanRT is also known as “Vulkan Runtime Libraries.” Now a lot of people might consider the VulkanRT as a virus or some malware and uninstall it from their computer.

But hold on to your horses, take no further step, cause you might be missing out on something. Follow through this in-depth article of what the VulkanRT really is and what benefits you can reap from it.

You might come across websites that claim the VulkanRT to be some malware program, but this is entirely false and baseless. This software is totally harmless and can benefit you a lot. So, let’s head in and see what the VulkanRT really is.

VulkanRT, also known as Vulkan Runtime Libraries, is a computational and 3D graphic API. It belongs to an American corporation, the Khronos Group, that specializes in producing API. It is a cross-platform API meaning it is compatible with all sorts of operating systems (such as Windows, Android, iOS, Linux, etc.).

The significance of VulkanRT is that it enhances the gameplay performance by reducing the overhead of the GPU. This allows you to draw out the best from your gaming experience. It enhances the performances of 3D applications. VulkanRT basically lowers your CPU usage and distributes workload through the CPU’s multi-cores.

Installing or updating new drivers for your AMD or NVIDIA graphic cards might have brought the VulkanRT to your computer. It can also be downloaded along with a new Graphic Card you might have installed.

Other than that, the VulkanRT might have been installed with a new game you downloaded as a lot of games require the VulkanRT for proper functioning. Therefore, a game that requires the VulkanRT is likely going to have it installed.

If you use the NVIDIA graphic card, the VulkanRT drivers can be downloaded from the NVIDIA website. For the software to run, you will have to restart your PC.

If you have not come across the VulkanRT and you are willing to check if you have it installed on your PC, follow the method below.

A lot of people can find this software in the application list, or they might come across it in the “Program Files” folder.

Now many people might consider the VulkanRT as a virus that popped out of nowhere. It might even be considered suspicious by your antivirus. Let us tell you that VulkanRT is in NO way a virus.

As it was stated above, the VulkanRT must have been installed along with drivers, games, or other software. It is required by some applications to run correctly. It helps you gain better performance from your hardware while utilizing 3D graphics. So, the VulkanRT is NOT a virus and is entirely harmless.

How to deal with VulkanRT?

Some people might be confused over whether they should keep the VulkanRT or just simply uninstall it. We know that the VulkanRT comes with the AMD or NVIDIA graphic card or may be installed along with a game.

A lot of games and other applications require the VulkanRT to function correctly. Therefore, you should not be thinking of uninstalling it.

The VulkanRT is entirely harmless and is present on your PC for your own benefit. Sometimes your antivirus might detect the VulkanRT as suspicious, but you should go ahead and ignore it. There is nothing to worry about as it is entirely safe and harmless.

NO. The VulkanRT is wholly safe and might be installed with your hardware, software, or video game.

Do I need VulkanRT on my computer?

Some applications and games require the VulkanRT to function correctly. Therefore, it is necessary to have it on your computer to run those applications properly.

How did VulkanRT get installed on my PC?

The VulkanRT must have installed along with driver updates, new graphic cards, or specific games and applications.

What should I do with VulkanRT? Keep it, or uninstall it?

It is recommended you do not uninstall the VulkanRT as it is necessary for some applications to function. Other than that, it is completely safe and full of benefits.

Now that you have come this far, the importance of VulkanRT must be pretty apparent to you now. It can take your experience with 3D graphics and video gaming to a new height. If you still have second thoughts about leaving it on your computer, you should know that the VulkanRT is going to bring you no harm at all.

You should keep it to allow the applications compatible with it to run correctly. We hope you would have found this article helpful.

Related Articles:
What kind of Laptop do I own? How To Check [Beginners Guide]
What to do when your MacBook Pro is running slow? | Fixing Guide
Nvidia RTX 2060 Vs RTX 2070 – Which one to go for!
What Can You Do if Your GPU Fans Are Not Spinning? 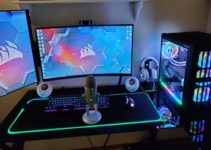