A motherboard is like the connection hub of a system. It is the foundation on which the entire system is based as per your liking. So, when investing in one, either you build your own PC, or you replace an old motherboard, you need to be certain that you are investing the right one.

The Intel Corei9-9900k is a 9th generation powerful processor that comes with eight cores, 16-Threads and the base frequency of 2.6 GHz which boosts up to 5.0 GHz at full speed. So, in order to house this processor, you will need a powerful motherboard as well.

Don’t know where to find the most suitable one? Not to worry because you have landed at the right spot. Today in this guide, we are going to reviewing the best motherboards in the market for the i9-9900k processor. So let us go ahead and jump right into it.

The MSI MEG Z390 is one of the most powerful and flexible motherboards in the market. It is packed with high-end features which makes it stand out from the rest and allows it to deliver unparalleled performance to the consumers. The motherboard comes with an LGA 1151 socket and is designed to support 9th i9-9900k, i7-9700k, i5-9600k and 8th Generation Intel Core, Pentium Gold and Celeron processors.

The motherboard is equipped with dual-channel DDR memory slots which mean that you enjoy up to 4600(OC) MHz for a smooth performance. Furthermore, the system is equipped with multiple additional features including E2500 LAN, Intel 802 11AC Wi-Fi, Turbo U. 2, 3x Turbo M. 2 with M. 2 Shield, Dual front USB 3.1 and Gen 2 Type-C ports.

If you are looking for a power-packed motherboard with the ability to support multiple hardware components, then the Gigabyte Z390 AORUS MASTER is one of the best options out of all. The motherboard comes with LGA 1151 CPU socket and Z390 chipset to support 8th and 9th generation Intel Core processors.

The motherboard comes with 4 DDMI slots that support dual-channel non-ECC buffered DDR4 RAMs to deliver fast performance. Furthermore, it comes with the advanced thermal system with a fin designed heat sinks and direct touch heat pipe, which keeps the system cool all throughout usage. Also, you get to enjoy built-in speakers, Intel CNVi 802.11AC 2×2 wave 2 Wi-Fi, Bluetooth 5 and 12 phases IR digital VRM solution with power stage. What more could you ask for?

The Gigabyte Z390 AORUS Pro is a powerful yet highly straightforward motherboard equipped with state of the art features that deliver high-end performance when connected with other hardware components. The motherboard comes with the LGA1151 CPU socket and Z390 chipset which is compatible with both 8th generation and 9th generation Intel processors.

Asus is one of the reputable brands in the market when it comes to gaming systems. Out of all, the Asus ROG Maximus XI Gene Z390 is one of the best ones ever designed by the manufacturer. It comes with the LGA1151 CPU socket and Z390 chipset to support 8th and 9th generation processors and maximize connectivity and speed.

With the 5-way optimization feature, you can overclock your PC intelligently keeping in mind the heating element. The thermal telemetry and the smart prediction feature keeps the Fan Xpert 4 running to keep the system cool throughout the performance. In terms of additional features, the motherboard comes with quad M.2, ROG DIMM.2, USB 3.1 Gen 2 and onboard 802.11AC Wi-Fi to enhance its overall functionality.

Other than the one mentioned above, the other motherboard which is compatible with the i9 processor and delivers effective performance is the ASUS ROG Maximus XI Hero. It is equipped with advanced high-end features which allows it to provide you with everything that you might need to set up a gaming or a mainstream PC for your personal needs.

The motherboard comes with LGA1151 CPU socket and Z390 chipset to support 9th generation processors. It comes with the ATX form factor which is equipped to support 64 GB of dual-channel DDR4 memory. Furthermore, it comes with multiple peripheral ports, a single display port, HDMI, and LAN (RJ45) ports. You can also enjoy various generation USB ports and optical S/PDIF out connectivity with this motherboard at your disposal.

The ASRock Motherboard Z390 Taichi is a highly compatible motherboard for the Intel Core i9-9900k processor. It is equipped with LGA 1151 CPU socket which goes well with the Intel processors and an Intel Z390 chipset to support both 8th and 9th generation processors.

Further, it comes with a standard ATX form factor which means that it comes with 4x DDR4 DIMM Slots and supports Dual Channel, Non-ECC, unbuffered memory up to of 64GB. For gamers, the motherboard comes with 3x PCI-Express 3.0 x16 Slots to add an additional graphics card, optical drives and more. It also comes with M.2 slots for supporting your storage drives and deliver fast and effective transfer speed for the best performance possible.

If you are looking for a micro ATX motherboard for your Intel Core i9 processor, then the ASRock Motherboard Z390 Phantom is one of the best choices for you. The motherboard comes with the micro ATX form factor, LGA 1151 processor socket and Z390 chipset to support bot 8th generation and 9th generation Intel processors.

Due to the micro ATX form factor, the motherboard only supports 2x DDR4 DIMM Slots which come with dual-channel, non-ECC and unbuffered RAMs up to 32 GB. Furthermore, it comes with Bluetooth 5.0, 1x PCI-Express 3.0 x16 Slot for graphics cards and 4 SATA 3 ports to support optical and HDD storage devices.

The Asus ROG Strix Z390-E is another great ASUS motherboard which is designed to provide maximum connectivity and speed to the consumers. The motherboard is equipped with the LGA 1151 CPU socket and Z930 chipset to support the Intel Core i9-9900K processor and other 9th and 8th generation processors in case you wish to update them in the future.

Features To Consider When Buying Motherboard For i9-9900k

Intel processors are highly powerful. When choosing the right motherboard for it, one needs to be certain that he or she is investing in the right one. But the question is, how do you figure out which motherboard if the most compatible for your needs?

Well, it is simple – you consider the components that you wish to add to your motherboard such as CPU, RAM and storage devices and the find a motherboard that is compatible with all your system requirements. So, here is the list of the most important features of the motherboard that one needs to consider before making the purchase.

The form factor refers to the size, layout and style of the motherboard. Picking it out is quite simple. Since there aren’t many of them out there, so you only have to choose between two form factors which are widely used by the manufacturers.

So, choose between ATX or micro ATX. As the name suggests, they are exactly the same, but the only difference is that the micro ATX is smaller than the ATX thus has less room for expansion slots, RAM, cards and more.

The CPU Socket, as the name suggests, is the connector on the motherboard where the processor is housed. Nowadays, processors are designed to fit in a unique CPU socket which limits the selection of motherboards. So, before you choose a motherboard, you need to keep in mind which processor you are going with.

Intel processors support LGA sockets whereas AMD processors use PGA sockets. So, in the case of i9, you will have to go with a motherboard that comes with the LGA socket.

Other than the CPU socket, the next feature that you need to consider is the chipset. The chipset on the processor and the motherboard is responsible for the communication between the different hardware which is also supported by the BIOS. If your chipset isn’t compatible, the BIOS won’t detect the CPU which will render it useless.

So, to save yourself from the hassle, make sure that your CPU and motherboard have the same chipset. The i9-9900 is only compatible with the 300 series chipset-based motherboards.

BIOS stand for basic input and output system. It is like a built-in software that the motherboard comes with to detect the hardware connect to the system and form a sense of communication between all in coordination with the chipset.

In simple terms, it regulates data from one component of the system to the other to form a flow and provide the users with a smooth performance. BIOS are often updated as well, so make sure to update them whenever your system asks you to do so for better performance.

DIMM slots are memory slots that are often arranged in groups of two, three and four. They are responsible for supporting the RAM that you install in your motherboard. The number of slots on a motherboard is dependent on the form factors. So, these two features go hand in hand; therefore, make sure to consider how many you need ranging from two to eight based on your needs.

In most cases, gamers and data analysts are the ones that build their own PC. The rest of us stick to the pre-built ones. For gamers, graphics cards are highly essentials. In most cases, one might need to add a dual graphics card, so here you will have to choose between SLI and Crossfire technology.

SLI allows you to add dual graphics cards but with the condition that the second card should have the exact same GPU, VRAM and SLI bridge. On the other hand, Crossfire only requires the second card to have the same GPU. But in both cases, you will need 2 PCIe x16 slots running at least x8 to enjoy a standard performance.

Other than the processing features, motherboards these days come with a wide range of pre-added technology. When buying one make sure to consider whether the motherboard comes with audio speakers, Wi-Fi, Bluetooth and other advanced features.

You can easily find a motherboard for i9-9900K processor within the budget range of $100 and $200. But in case you are planning on running multiple RAMs, storage devices, Graphics cards and wish to over-clock your PC then you will need to invest in higher motherboards that would cost up to $500. So, choose your motherboard based on your budget and needs.

2. What is the relation between VRM and heat sinks?

3. What motherboards are compatible with i9?

9th generation processors are highly powerful as they come with multiple cores and higher voltage requirements. Therefore, you need compatible motherboards to run them at their full capacity. According to Intel, 300 series motherboards are the most compatible with i9 processors so make sure to get those for optimum performance.

Definitely! The 9th generation Intel Core i9-9900K processor is one of the most powerful and fastest processors for gaming in the world. With its multiple cores and the frequency speed of 5.0 GHz, you can enjoy optimum gaming experience on an over-clocked PC and have the upper hand over your competitors.

Buying a motherboard is a huge long-term investment. When buying one, it is important to make sure that you get a future-proof one so you can always upgrade it based on your needs instead of investing in a new one.

So instead of jumping right into the buying process, first make a list of features that you want in a motherboard, the performance that you expect and the type that you want. Only then you will be able to choose the right motherboard for your processor. Good Luck. 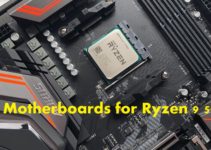 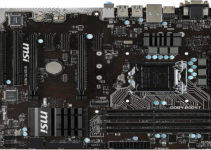