What are the differences between Intel Core i9-9900K and AMD Ryzen 9 3900X? We analyze head-to-head all specifications and features to find out the better cpu.

Critic Reviews
“Intel might be late to the game with its first mainstream octa-core processor, but the Intel Core i9-9900K is an impressive debut. The Intel Core i9-9900K’s incredible increase in processing power can’t be understated, and this CPU will be a boon to any…”

Critic Reviews
“AMD has proven with the Ryzen 9 3900X that they are no longer following, and are now the industry leader for enthusiast CPU’s”

On the other hand, Intel stepped up its processor game by releasing the Core i9 9900K, which comes with a price tag of $500. The Intel Core i9 9900k comes with a higher core count than the previous processors we have seen from Intel. It features 8 cores, each core executing two threads simultaneously, making a total of 16 threads.

This new Octa-core processor released by Intel has definitely given AMD a wake-up call because it really closes the performance gap with AMD’s processors and shows better performance in some situations. The 9900K boosts up to 3.6GHz on the base frequency and a staggering 5GHz on Turbo Boost frequency.

It also packs the integrated Intel UHD Graphics 630 GPU, which gives it an edge over its competitor, the Ryzen 9 3900x. The Core-i9 9900k has a manufacturing node of 14nm, which is entirely below par compared to AMD’s processors.

Featuring the Cache size of 2MB and 16MB, on L2 and L3, respectively. Intel has also brought back its STIM or Soldered Thermal Interface Material into the i9 9900K, making sure to dissipate all the heat when your CPU is under heavy load.

This Core-i9 processor also features a TDP of 95W with maximum temperatures up to 100C. The i9 9900K features a DDR4-2666 memory type with 128GB memory size and memory bandwidth up to 41.6GB/s with no ECC support when it comes to memory support.

AMD released its 3rd generation high-end processor, known as the Ryzen 9 3900x, that will cost you around $500. Based on the company’s Zen2 technology, the 3900x features an incredible 12 cores, each core executing two threads at a time, making a total of massive 24 cores.

With the release of the 3900x, AMD has really stretched out its performance capabilities and set a high bar for Intel’s chips.  The 3900x’s 12 cores clocks up to 3.8GHz on the base frequency and 4.6GHz on Turbo Boost frequency.

The 3900x features the DDR4-3200 memory type with 128GB memory size and memory bandwidth up to 47.68GB/s. When it comes to TDP, AMD has made no significant improvements as it features a TDP of 105W with maximum temperatures up to 95C.

We have seen the same numbers in most of the older processors released by AMD.  The 3900x also features a PCI 4.0 Express version that gives it an upper hand over the Intel processors because we haven’t seen the 4.0 PCI version in most of Intel’s processors.

It is pretty evident that the Ryzen 9 3900x has the upper hand over the i9 9900k when it comes to the number of cores and threads. The 3900x features 12 cores and 24 threads, compared to i9 9900K’s 8 cores and 16 threads. The more number of cores and threads makes it easy for a processor to handle serious workloads. And, the 3900x makes sure to make no mistake when it comes to handling severe applications like video editing, 3D animation work, video editing, and other stuff.

The cache size and memory support are essential features to look out for because most of the games’ performance depends on the CPU’s ability to access memory and store more Cache data.

If we were asked to choose a processor between these two, we would pick the Ryzen 9 3900x because it is an overall better processor. It features more cores and threads, better productivity, less power consumption, and better value for money.

The 3900X also closes the gap in gaming performance with the i9-9900K. It shows hugely better performance than the i9-9900K when handling serious workloads like video editing, photo editing, or 3d animation. To sum it up, the Ryzen 9 3900x is a clear winner for us. 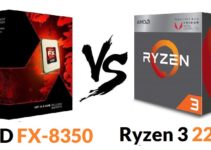